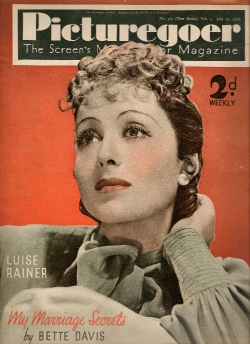 That’s Luise Rainer, who in three films has achieved more than any actress since Talkies.

WITH her second picture appearance – in The Great Ziegfeld – Luise Rainer won the award of the Academy of Motion Picture Arts and Sciences for 1936’s best performance by an actress.  Expert opinion gives her a strong chance of winning it again in 1937 for The Good Earth.

After three pictures she is the actress of the year – Garbo’s greatest rival.  Yet, when you come to think of it, after those three pictures and fame that few attain, probably less is known about Luise than about any of the official mystery women of movies, including the Great Greta herself.

Both stars, incidentally, are in the same studio, and piquancy will be added to the judging for the next A.M.P.A.S. awards by the fact that the only other outstanding acting performance to date is that of Miss Garbo in Camille.

The film colony itself has got used to the Garbo act, but it has never quite fathomed the enigma that is Luise Rainer.

The two women, as a matter of fact, share one experience that might provide a common bond.  Luise’s debut in Hollywood was strikingly similar to the frigid reception that must be one of Garbo’s most melancholy memories.  Lonely, drably garbed, coiffured and made up according to Hollywood standards and unable to speak English very well, the newcomer from Vienna made very little impression on her arrival.  She almost, in fact, dropped out of sight.  She might, indeed, have followed that small army of Continental importations who have been thankful that they had two-way tickets in the last few years, but for the fact that at the time – 1935 – Garbo was suffering from a particularly acute attack of I-tank-I-go-‘ome sickness and the studio thought Rainer might be a good trump to have up the M.G.M. sleeve in the negotiations.

Greta Garbo in Camille.  Luise beat Garbo to the Best Actress Oscar in 1937 for her role in The Good Earth.

It is not generally known that it was Constance Collier who took the Viennese actress under her wing during this trying period, supervised her costume and appearance, and brought out the full force of her striking personality.

Even then, and after she had come through her film tests with honours, Hollywood was hesitant about holding out the glad hand.  When he saw her on screen, Mr. Louis B. Mayer, complained that her appeal was too unusual for her to be groomed in small parts; she would have to have a lead or nothing.

The problem, it is said, caused him considerable loss of beauty sleep.  Hollywood prefers to “build up” its new personalities gradually, to make sure that they have that something that creates a response at the box-office before digging too deeply into its trouser pockets.

Despite her record, mostly in highbrow drama on the Continental stage, Luise Rainer was unknown to the film public.  Robert Ritchie, the talent scout, who was once engaged to Jeanette Macdonald, saw her in a Pinero play in Vienna three years ago.  He was so impressed that he went to her dressing room after the performance, and the same evening made a contract with her on the backs of menu cards.

She had been on the stage since as a 16-year-old girl she had discovered that the fortunes of her once wealthy parents had ebbed.  She had made a reputation in Shakespeare, Ibsen, Pirendello [sic] and, like Dietrich, had appeared with the Max Reinhardt company.

But when she arrived in Hollywood to meet that dismal welcome she was still a doubtful screen quantity and she was not even pretty according to film standards.

It is not surprising, therefore, that Mr. Mayer hesitated.  Then again studio politics came to the rescue of Rainer’s career.  Myrna Loy chose that moment to “walk out” of her part in Escapade.  That unexpected circumstance finally decided the executive to take the gamble with his Austrian importation.  Luise was rushed into the Loy role.

The newcomer puzzled her co-workers from the start.  Before long weird stories were emanating from the Escapade set via William Powell and others of a strange phenomenon, who, one moment, while the cameras were turning, was a great actress of unusual dramatic force, and the next, a shy, happy child indulging in such pastimes as wheeling her pet dog Johnnie round the lot in a barrow.

She played Jazz tunes on a gramophone incessantly between scenes to which, to the amazement of the spectators, she executed spirited clog dances.  “She’s a grande artiste one minute, and an irresponsible kid the next.  But take it from me,” said Powell, “this girl is going to be a big star.”  Escapade proved him right. 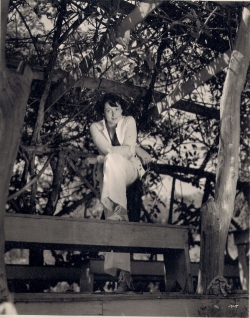 Luise enjoyed walking and spending time away from the Hollywood hubbub

Her private life even further baffled the rustics.  She attended none of Hollywood’s parties.  If she was seen at all it was generally walking through the countryside or enjoying herself immensely at one of the fun fairs.

She defies all the conventions in regard to clothes and make-up (with the exception of lipstick), wears slacks most of the time, and moves about in a limited circle of a few intimate friends.

Her habit of acting on impulse has more than once proved embarrassing.  Just after Escapade, when everyone was talking of the new discovery, she went away without notifying anyone.  It never occurred to her that she would be missed.

On another occasion she set off to spend a morning at the beach, and finished up in Mexico.  When she returned two days later her employers, her servants and friends were nearly frantic.  It seems that she had had a sudden urge to go exploring, and had, after travelling most of the day, found herself near the border and unable to resist the temptation to see a new country.

Her marriage this year to Clifford Odets, the playwright was, however, probably the biggest surprise she has yet sprung on the film city.  Nobody suspected a romance between the brilliant Austrian actress and the young playwright, both of whom had remained aloof from the Hollywood mob.  Even the columnists were caught unawares.  There had been none of the usual exhibition of holding hands under the tablecloth at the film colony night spots.

Moreover, it was known that at the time she went to America, Luise was broken-hearted over the tragic end of a romance in Europe.  The man’s identity is only hinted at even to her intimates.  He was a famous figure in the world of State, and he died in an airplane accident.

Luise, child of nature and impulse in so many things is serious about her marriage and her career.  In three films she has achieved more than any actress since talkies.  There are no heights which she may not attain – even the throne of the Garbo herself.