The years between the start of the new century and Luise’s ninth and tenth decades was, against all odds, one of the busiest times of Luise’s life since the 1940s. By her own admission she did not expect to be alive to see her 100th birthday; convinced that she would never complete her memoirs she donated most of her correspondence and paperwork to the Howard Gottlieb Archives in Boston (a move she would later regret when she was unable to recall facts in interviews). It was not just her centenary which propelled Luise back into the limelight; after the death of Katharine Hepburn in 2003 there was a general feeling that the last of the great movie stars had passed. To find someone who was there and who was willing (and able) to discuss those Hollywood glory days was an opportunity too good to be missed and Luise was now happy to give her side of the story and revel in the attention. The new decade saw Luise give more interviews than any time since her 1930s heyday. Other notable highlights were her appearance in a new film, Poem, in 2003, another appearance at the Academy Awards and her astonishing trip to LA for the TCM Film Festival, at 100 years old.

The list is in chronological order and includes key dates in Luise’s life and career.  * denotes magazine and newspaper articles and interviews, most of which have been copied in full and are available on this site – click the links to open a new page.

Sept: Rare screening of Big City at the Donostia-San Sebastian Film Festival, Spain. Part of a Frank Borzage retrospective.  Luise did not attend.

Sept 26: An Evening with Luise Rainer for Boston University, Massachusetts. Interviewed on stage by Frank Avruch

Mar 24: Attends the Academy Awards in LA for another retrospective for the 75th anniversary of the awards
May 8: Release of her final film: Poem – Ich setzte den Fuß in die Luft und sie trug
Jul 28 (to Oct 18): Extravagant Crowd: Carl van Vechten’s Portraits of Women exhibition at the Beinecke Rare Book and Manuscript Library, Yale University features photos of Luise

Feb 24: I wanted to live more than I wanted to act – interviewed by Christopher Wood for The Times*

: Interviewed by director Arthur Dong for the documentary Hollywood Chinese

Sept 23: Guest at the launch of Elaine Paige’s autobiography, Memories, at the National Theatre, London

Feb 20: Forgotten Golden Girl of the Oscars by Gerard Gilbert in The Independent*
Oct 12: Interview with Mick Brown for The Daily Telegraph newspaper*
Oct 24 (to Nov 7 2010): Hollywood Chinese exhibition at the Chinese American Museum, Los Angeles, featuring images and memorabilia from The Good Earth 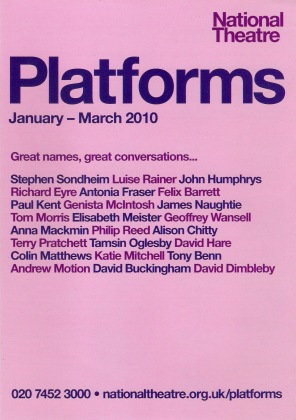 Cover of the National Theatre leaflet announcing Luise’s appearance at the venue in 2010.

Jan 5: Interview with Richard Stirling for The Scotsman newspaper*
Jan 12: Luise Rainer’s 100th birthday
Jan 12: Turner Classic Movies (US) screen a marathon 14 hours of Luise’s films to celebrate her birthday
Jan 12 to 24: Short season of three films at the Edinburgh Filmhouse
Jan 17: Double screening of The Good Earth and The Great Waltz at the BFI Southbank, London, including interview and Q&A
Feb 1: Luise appears at the National Theatre, London to discuss her life and career with Sir Christopher Frayling
March: Luise takes The Proust Questionnaire in Vanity Fair magazine*
March: Luise by Hans Ulrich Obrist for AnOther Magazine*
Apr 25: Luise appears at the Egyptian Theater, Hollywood for an interview with Robert Osborne and a screening of The Good Earth. Part of the TCM Classic Film Festival.
Nov 5: The Good Earth screens as part of the Virginia Film Festival
Nov: Warner Archive release the Signature Collection DVD: The Toy Wife, The Emperor’s Candlesticks and Big City on DVD for the very first time

Jan 12: On her 101st birthday Turner Classic Movies US broadcasts their festival interview from 2010
Feb 23: Interview with Colin Patterson for BBC Radio 4’s Today programme
Mar 30: Attends opening night of a new production of Clifford Odets’ Rocket to the Moon at the National Theatre in London
Sept 5: Honoured with a star on Berlin’s Boulevard des Stars