Playbill for the production of A Kiss for Cinderella at the Music Box Theatre, New York, 1942.

Luise Rainer marked her Broadway debut on Tuesday 10th March 1942 in J.M. Barrie’s A Kiss for Cinderella, at the Music Box Theatre, 45th Street. The play was written in 1916 and had its debuts in London and New York the same year, with Maude Adams creating the title role. It was revived a number of times between the wars notably in 1926 and again in 1937, and a silent film was made in 1925, starring Betty Bronson.

Inspired by the classic Cinderella fairytale, but set in the (then) modern-day of the First World War, a London girl (‘Miss Thing’) looks after four infant refugees but one night, during a snowstorm, she is found asleep in a doorway by a policeman…but she dreams that he is Prince Charming and that she is being whisked away to the his Highness’ Ball. Barrie updates the traditional story with a Red Cross Nurse taking the role of ‘Fairy Godmother’ and a Cockney whom our heroine sees as the ‘King’. The framing of the story around a down-and-out char-girl whose flights of fancy really do take flight allows for some fantastical staging and effects to bring her dreamworld to life.
It’s easy to see why a revival seemed fitting during the Second World War, but one senses times and attitudes had changed somewhat. Previous productions had garnered
positive reviews but the Boston Post’s Mark Barron expressed his view that the fantasy elements of the play made it “too sugary for such hardbitten times as these” (March 1942), although Brooks Atkinson in the New York Times was more forgiving of the effect time had had on the play.
The play ran for 48 performances in New York, ending on April 18th 1942. It had aleady toured the East Coast, appearing at the Cape Playhouse in Cape Cod, and the Maplewood Theatre, New Jersey on the ‘straw hat circuit’. An interesting side note to this production is the story of a then unknown young actor called Robert Ryan who, looking for work, ingratiated himself with some of the cast whilst they were playing in Cape Cod. He left a particular impression on Luise and, when they moved on to Maplewood she introduced him to her ex-husband Clifford Odets, who was about to start rehearsals for his new play Clash by Night. They liked Ryan and he was cast as ‘Joe Doyle’ opposite Tallulah Bankhead. The production toured briefly before hitting Broadway. Although the reviews were scathing, Ryan received good notices and was spotted by Pate Lorentz of film studio RKO who immediately offered him a contract. He signed and went off to Hollywood to become a leading man in movies for the next 20 years.

Ralph Forbes and Luise Rainer in J.M. Barrie’s A Kiss for Cinderella (1942).

Related articles:
Old Wine, New Bottling: a review by Stark Young from The New Republic (1942)
The following review, by Rosamund Gilder, appeared in the May 1942 edition of Theatre Arts magazine (reproduced in full):
A war play of a very different vintage is represented by the revival of J. M. Barrie’s A Kiss for Cinderella which Cheryl Crawford and Richard Krakeur shepherded to Broadway. Written during a former, more murderous but less ‘total’ war, its amiable escapism must be blamed on its author rather than on the times that saw its birth. The winter of 1916 when it was produced was grim enough, with London gloomy under its anti-Zeppelin blackout and the insensate slaughter of the Western Front continuing endlessly. But Barrie’s peculiar Midas-touch had not deserted him; he could turn even the horrors of war into whimsy and laughter. He is the supreme exponent of the art of the bedtime story in theatre dress. His cannily-built plot is shot through with laughter and tears, lit with imagination, flavored with satire so richly chocolate-coated that its acid bite is all but hidden. In the first production, Gerald du Maurier played the policeman, a veritable prince in disguise, and Hilda Trevelyan was the quaint and lovable beggar-maid, a role which Maude Adams made her own on Christmas day, 1916, at the Empire Theatre in New York.
Lee Strasberg has directed the play in its present revival and is presumably responsible for the occasional references intended to bring it up to date which only serve to underline the essential remoteness of the play’s actual mood. As a period piece both its humor and its satire might have greater validity and would certainly exhale a nostalgic charm which the present production lacks. But the main difficulty of this revival is Miss Rainer’s invincibly continental interpretation of a part which, for all its embroideries and embellishments, is essentially English and essentially cockney. Her gaunt frame, her dark, drawn face suggest that this Cinderella is herself a refugee from a starving Europe rather than an imaginative little London slavey doing a bit of rescuing on her own. Playing opposite such solid Anglo-Saxon actors as Ralph Forbes in the role of the policeman and Cecil Humphreys as Mr. Bodie, her inability to take on the attributes of Sir James Barrie’s ‘Miss Thing’ is all the more marked.
Credits
A Kiss for Cinderella by Sir James M. Barrie, at The Music Box, New York City, NY, USA
10 March – 18 April 1942
Cast (in order of appearance):
Cecil Humphreys as Mr. Bodie / King
Ralph Forbes as the Policeman / Prince
Luise Rainer as Miss Thing
Victor Morley as Mr. Jennings / Lord Mayor
Emily Loraine as Mrs. Maloney
Doris Patston as Marion
Le Roi Operti as Coster / Bishop
Abby Bonime as Gladys
Elizabeth Leland as Delphine
Marilyn Chu as Ching Ching
Patsy O’Shea as Gretchen
Edith King as Godmother / Dr. Bodie
Elinor Breckinridge, Helen Kramer, Jean Reeves, Lukas Hovinga, John Taras, Robert Wilson as Courtiers
Victor Chapin, Fred Hunter as Pages
Roland Bottomley as Lord Times
Glen Langan as Censor / Danny
Ivy Troutman as Queen
Jacqueline Gately as Beauty / Ellen
Blanche Faye, Olga Daley, Doris Hughes, Beatrice Cole as Beauties
Eunice Lee as Venus
Sarah Burton as Nurse
Credits:
Presented by Cheryl Crawford and Richard W. Krakeur
Staged by Lee Strasberg
Settings by Harry Horner
Choreography by Catherine Littlefield
Costumes by Paul du Pont

Ralph Forbes, Luise Rainer and Roland Bottomley(?) in A Kiss for Cinderella (1942) 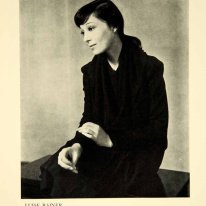 Luise Rainer publicity shot for A Kiss for Cinderella (1942) 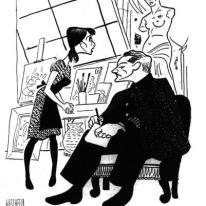 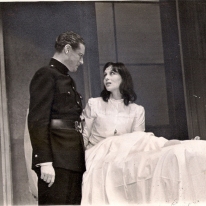 Ralph Forbes and Luise Rainer in J.M. Barrie’s A Kiss for Cinderella (1942).

Playbill for the production of A Kiss for Cinderella at the Music Box Theatre, New York, 1942.